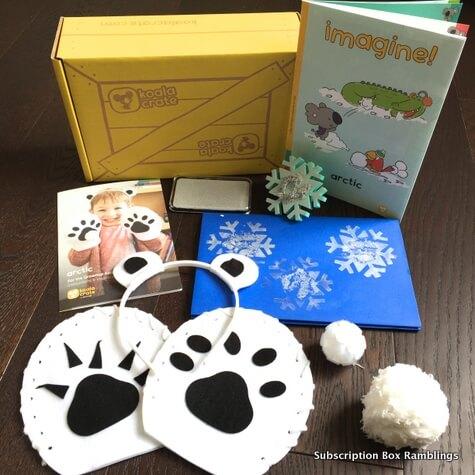 Koala Crate is from Kiwi Crate’s new(ish) line of crates and is designed for preschoolers ages 3-4.  The box includes all the materials and inspiration for projects related to a theme such as colors, transportation or safari. Crates are designed to give children exposure to new materials and new concepts that encourage hands-on learning and fun. 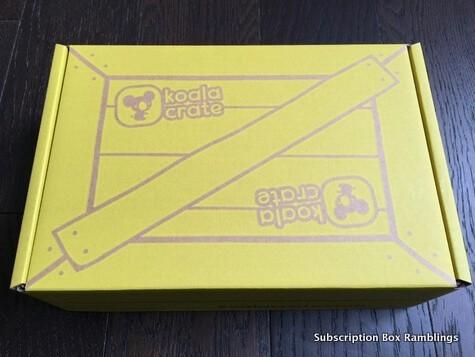 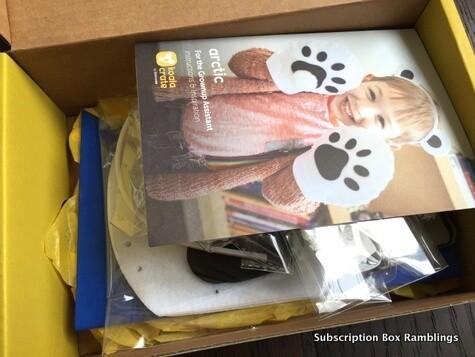 This box looked pretty familiar!  At least the card did. 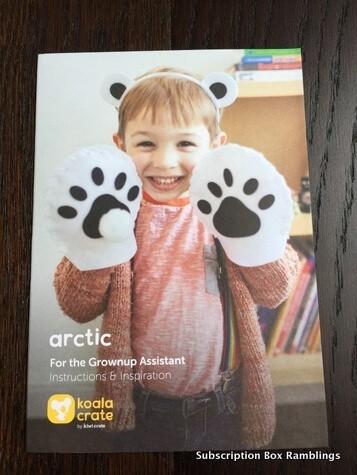 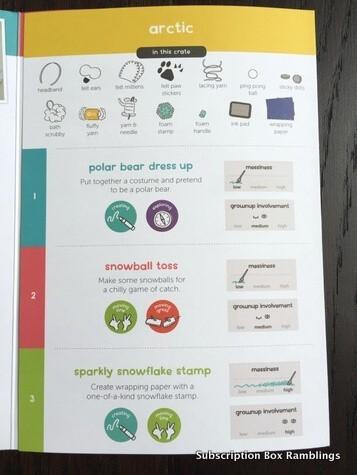 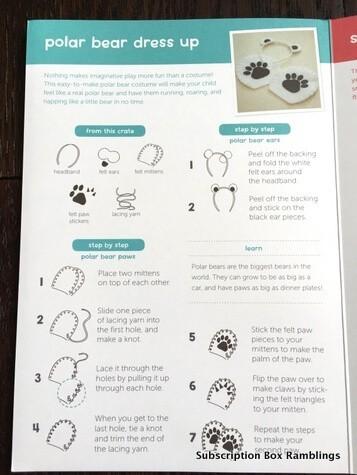 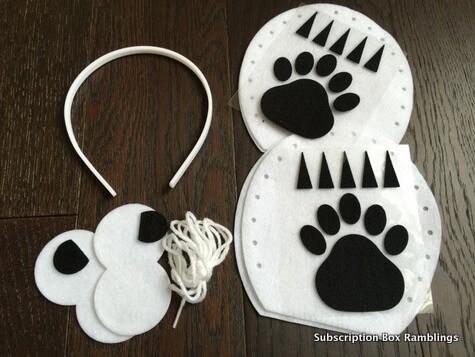 Polar Bear Dress Up – The Materials

Polar Bear Dress Up included all of the materials needed to put together a costume and pretend to be a polar bear.  It was low on the messiness scale, medium on the grownup involvement scale and involved “creating” and “exploring”. 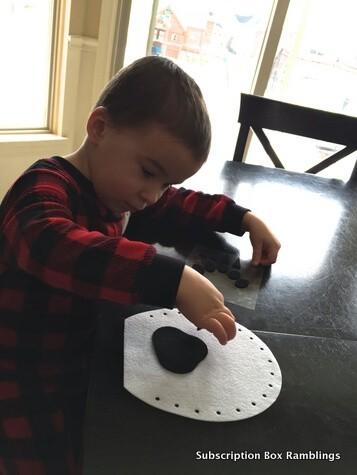 Polar Bear Dress Up – In Process 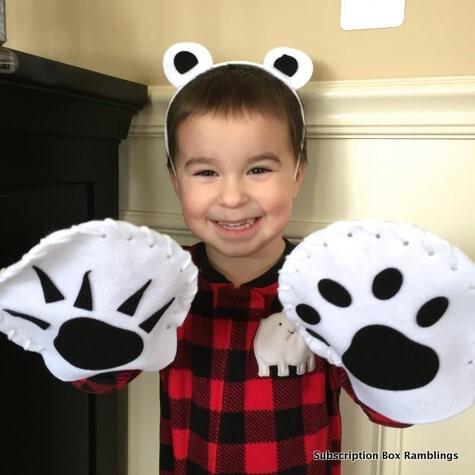 W (my 3 year-old) did this one mainly on his own (I did the lacing though), but he did have a little trouble peeling off the some of the claws.  I think they were too sticky for his little fingers.  I realized when I opened this box that this seemed SO similar to a previous project we’d gotten from Kiwi Crate (which is related to Koala Crate).  And sure enough, it was the same project that appeared in the December 2013 Kiwi Crate!  It wasn’t a big deal because I did this one with W and that one I had done with L (I think he was 5 at the time), but I thought I should mention it. 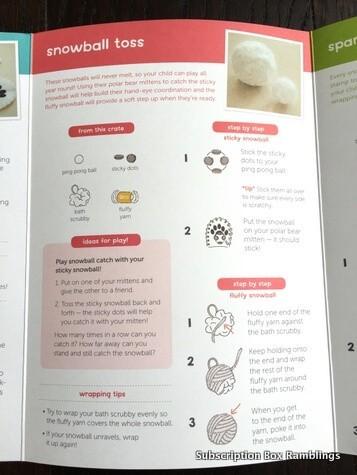 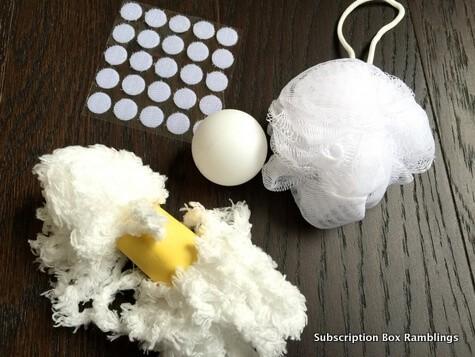 The second project we worked on was Snowball Toss which included the materials necessary to make some snowballs for a chilly game of catch.  We’d made one of the snowballs in that December Kiwi Crate I mentioned above, but the second was a totally different project.  This project was low on the messiness scale, medium on the grownup involvement scale and involved “moving – fine” and “moving – gross”. 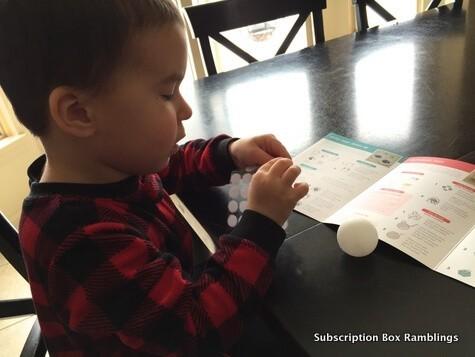 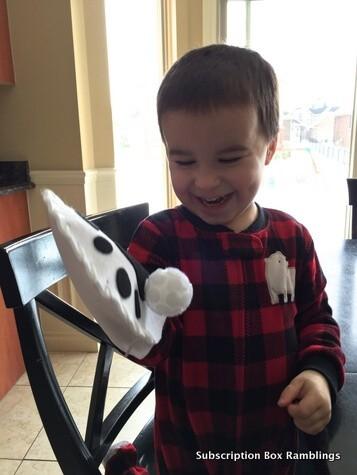 One of the snowballs (the sticky one) was simply a ping pong ball with velcro dots on it.  The second one was a fluffy snowball and was made from a bath pouf and fluffy yarn.  As we were wrapping the yarn around the bath pouf I was thinking, this isn’t going to work.  But it did!  Quite well actually.  I was impressed.  The fluffy ball was just for playing catch with, but the sticky ball actually did stick to the polar bear paws we had made earlier.  W was SO impressed! 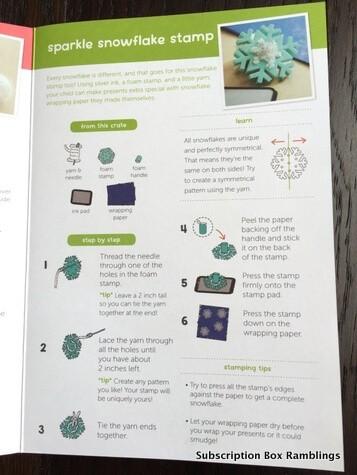 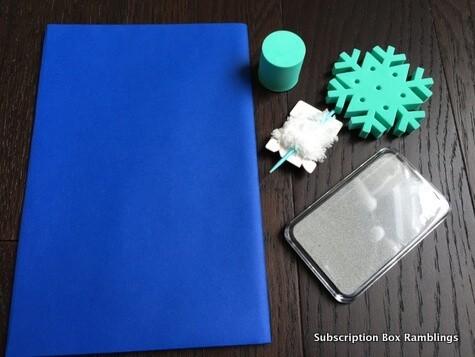 The third project included all of the materials necessary to create wrapping paper with a one-of-kind snowflake stamp.  It was high on the messiness scale, high on the grownup involvement scale and involved “creating” and “moving – fine”. 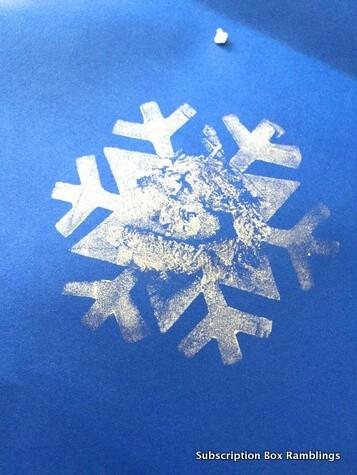 W and I had a heck of a time with this stamp.  We (okay it was more like me) could not figure out how to get the yarn laced through the stamp. It was just not working out.  Our ink pad also seemed to be a bit dry.  I can see how the project could have been messy, but we had to really work to get the ink to stick to our stamp.  Luckily W didn’t mind and was just happy to play with it. 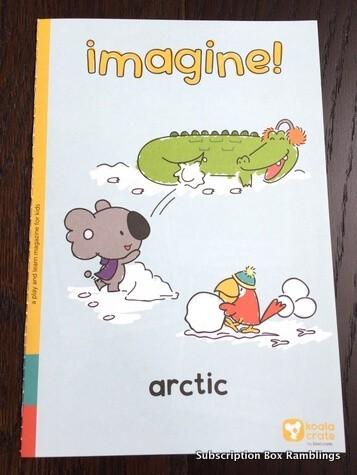 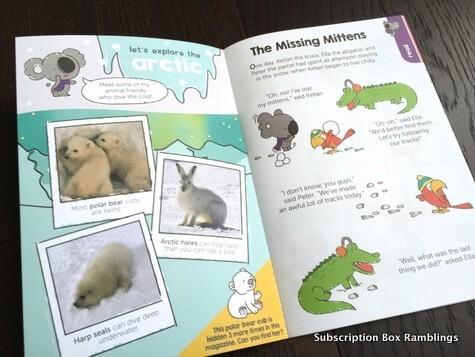 Koala Crate also includes the imagine! magazine.  imagine! includes stories, mazes and other fun activities relating to the theme. It’s a great addition to the crate and allows you to continue with the theme long after you have finished the projects.

What do you think of Koala Crate? I love that Kiwi Crate branched out into some different ages groups because this one is just right for W.  If you are interested in subscribing you can sign up here and use coupon code “SNOW40” to save 40% off your first month.