Disclosure: This complimentary box was received for review purposes. All opinions are my own and no compensation was received.  This post contains affiliate links. 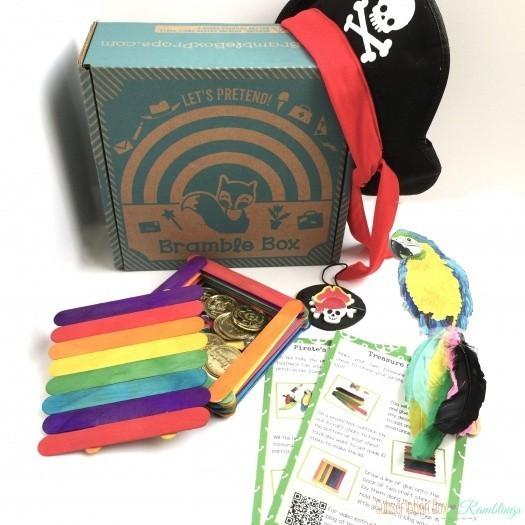 Bramble Box provides creative play kits containing dramatic play materials and activities. Educational and fun, Bramble Boxes promote free play. Every box contains all the materials you need and a little inspiration – all you have to add is imagination. Boxes are designed for children age 3 – 8, but could be enjoyed by a variety of ages of children over age 3. Since the activities are open ended, kids can use them in a way that best suits their play level. 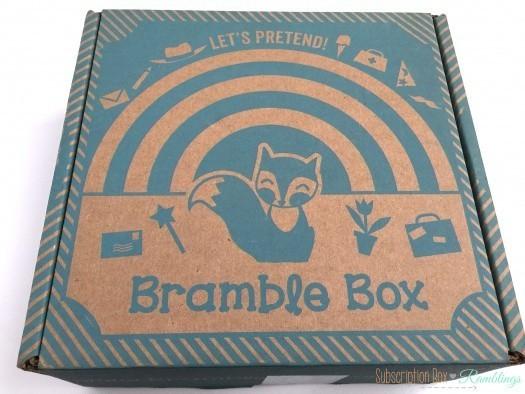 Bramble Box ships via USPS and took just a few days to arrive. If you sign up before midnight on the 4th of the month, they will ship your first crate by the 15th of that month.  Otherwise your first box will ship the following month. 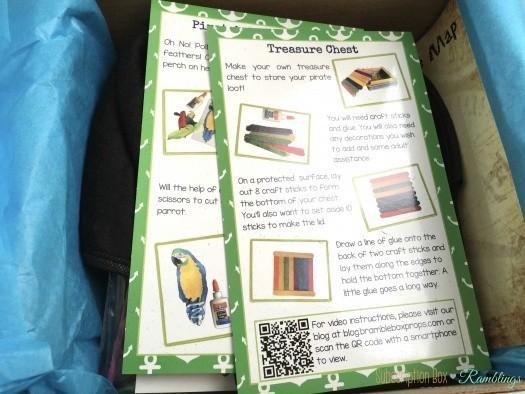 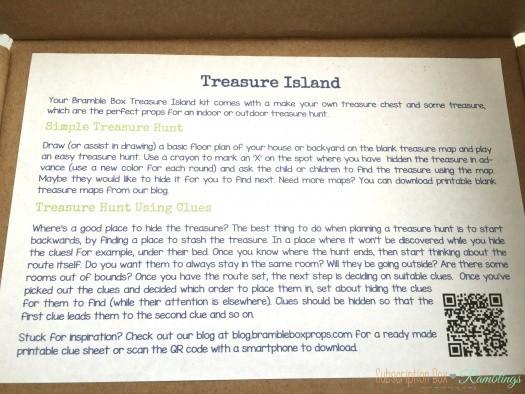 The February 2016 Bramble Box theme was “Treasure Island” and includes the following projects: 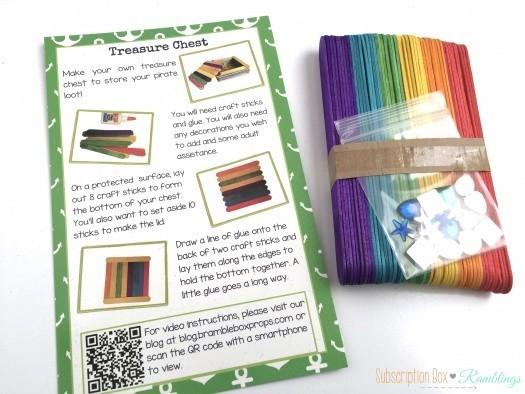 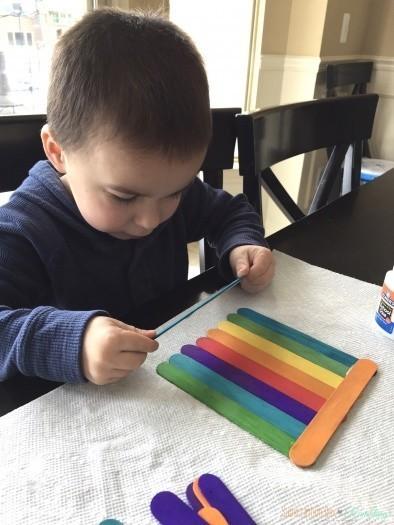 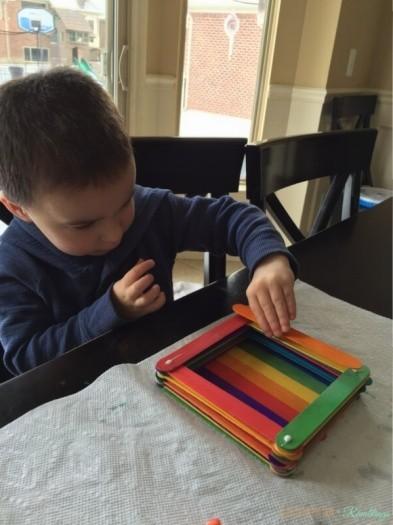 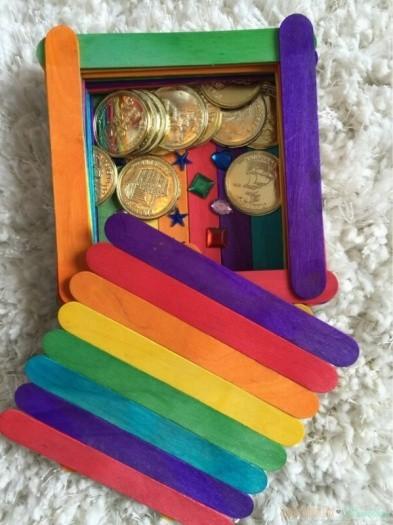 The first project we worked on was Treasure Chest.  It was fairly simple and involved making a box out of brightly colored popsicle sticks.  My 3 year-old (aka W) was super into it and did most of it on his own.  I gave him the instructions on where to place the sticks and where to squeeze the glue when we were building, but he did the actual work on his own.  I will admit to color coordinating the bottom of the box and the lid, but I had W’s permission so it was fine.  The box also included little gemstone stickers to decorate your box with, but W decided it was smarter to put them inside, as if they were the actual treasure.  I can’t disagree with that logic. 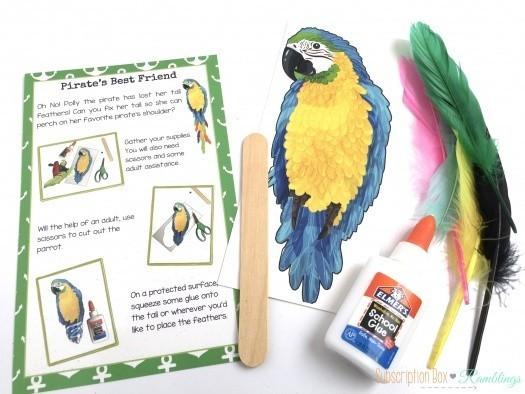 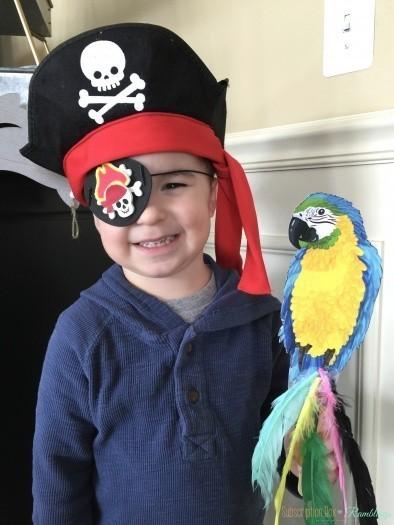 The second project was to make a “pirate’s best friend” aka a parrot! This one needed a lot more help from me.  I cut out the parrot shape from the paper while W made his eye patch (that just involved peeling off stickers and arranging them on the patch).  We put the feathers and the stick on the parrot together and then W got to try it all on!  The box included a pirate hat, so along with the parrot and the patch, he had the full pirate look going. He wouldn’t let B see him after he (B) got home from work until the pirate outfit was back on. 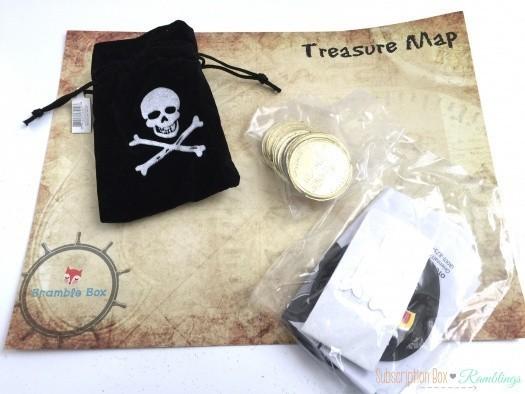 The box also included a treasure map, “treasure” and a little bag to keep your coins in.  W’s a little young to understand making / following a treasue map, so we skipped that for now.

What do you think of Bramble Box?  We thought this month was a great one and had so much fun with the projects. I was amazed at that W was so into the popsicle stick treasure chest!  He just loved it.  If you are interested in subscribing you can head on over to their site and check them out.  Make sure to use coupon code “blog20” to save 20% off your first box too!