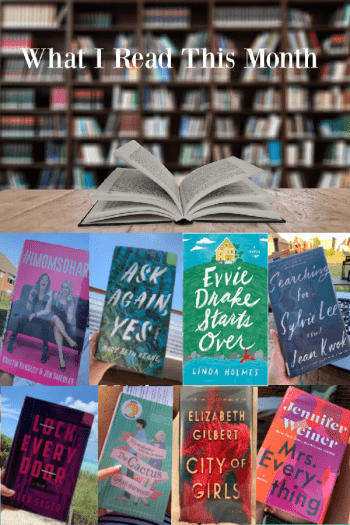 Thanks to our vacation week, I read lots of books in July!  Here they are and a few brief thoughts on them:

~#IMomSoHard by Kristin Hensley and Jen Smedley:  I was afraid this might be a little Rachel Hollis-ish (I was not a fan of her books), but it was nothing of the sort. This book was funny and real and I want to be friends with these two for sure.
~“Evvie Drake Starts Over” by Linda Holmes (Library): This book gets fantastic reviews on Amazon, but I was just meh on it. My SIL read it as well and felt the same.  It was a quick, easy read, but also very predictable and if we are being honest, pretty unrealistic.   The characters were easy to like though and I did find myself rooting for them (while also hoping a twist would be coming on the next page).  Spoiler alert – there are no twists.
~“Mrs. Everything” by Jennifer Weiner (Library): I was on the waiting list for this book at the library FOREVER and it was so worth it. It is set in Detroit (I live in the Metro Detroit area) which hooked me instantly. I loved that it followed the sisters lives from early childhood all the way through their lives. It was sometimes predictable, but not in a boring way. The book took a deep look into the relationships between the sisters and showed just how different their relationships were with their mother mainly due in part to the different expectations she had for the girls. If you are looking for a summer read, I would recommend this!
~Searching for Sylvie Lee by Jean Kowk (Library): I did not expect to enjoy this book as much as I did.  It is told in the voices of the three main characters in the book (Ma, Sylvie, and Amy) and does a fabulous job of detailing what each is going through and how they relate to the outer characters.  I was not anticipating the number of twists and turns in this book. So many family secrets and I did not know (or even have an idea) of what happened to Sylvie until the very end.
~Ask Again, Yes by Mary Beth Keane (Book of the Month): YES!!!!  This book centers around two NYPD officers who happen to be raising families in the same neighborhood.  With all these things in common you would expect the families to be the best of friends.  Not so much!  This book deals with mental illness, addiction, young love, tragedy, forgiveness, you name it, this book has it.
~City of Girls by Elizabeth Gilbert (Library):  A good summer read. It was silly and fun, but also gave a lot of insight into life in NYC during (and post) World War II. The book was long (not slow, it just had a lot of pages), but I found myself interested in all of Vivian’s adventures and life at the Lily Playhouse.  Vivian was ahead of her time to say the least.  I did find it odd that the book was basically a letter to Angela who wanted to know how Vivian knew her father.  Vivian did not meet this womans father until way letter in life, so it no made sense that she detailed her entire life story in the letter, but I am choosing to look past this and just enjoy the book!
~The Cactus by Sarah Haywood (Library): I wanted to love this book, but I found the main character (Susan) highly unlikeable.  I guess I should have expected that though because she is the prickly cactus in the book.  It did have a huge twist (I did not see it coming at all), while I suppose made me understand Susan more, but I cannot say I loved this book.
~Lock Every Door by Riley Sager (August Book of the Month): Not my favorite Riley Sager book.  It just did not hook me in.  Maybe because it was so unrealistic and there were SO many red flags that Jules (the main character) just continued to ignore.  I guess I am more invested in the book than I thought because I finished it weeks ago and am still thinking about Jules. LOL!!

What did you read in July?  Any recommendations for August?