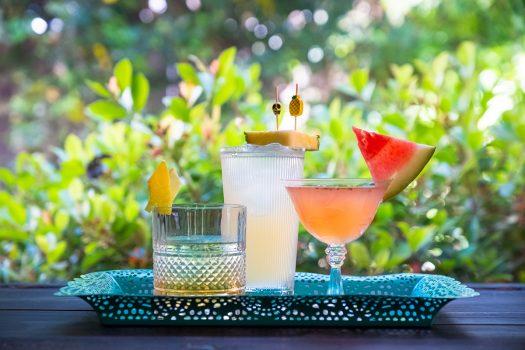 We have spoilers for the July 2021 Shaker & Spoon box!  The box theme is Catching Up with Cachaça!

At the Copa, Copacabana, it’s said that music and passion are always the fashion, but did you know that the drinks are top-notch, too? Inside the NYC nightclub Barry Manilow so splashily sang about, yes—but even more so directly from the source: the coastal neighborhood within Rio de Janeiro, a land of samba, sunshine, and ice-cold cachaça cocktails.

No beach day, especially in Brazil, is complete without the muddled mix of lime, sugar, and spirit called a caipirinha, but the road to formal recognition for its star was a long one. Its push for legitimacy culminated fairly recently with three major milestones: the United States’ marking it as a distinctive product of Brazil in 2013, and two enormous marketing opportunities when the country hosted the 2014 FIFA World Cup and the 2016 Summer Olympics and Paralympics.

This led to countless “What to Drink During . . .” articles and elevated those festivities for sports fans by showing them how to fill their glasses and hearts with cachaça as the Cariocas so joyfully do.

Like the margarita did for tequila internationally, this cemented the caipirinha’s status as an ultra-tasty Trojan horse for cachaça, delighting drinkers with simplicity but then piquing their appetite for more ways to complement its earthy funk and fruitiness. One formula was not enough to fully express the complexity of this belle of Brazil.

Along with this new cachet, the roster of supporting ingredients and ways to enjoy cachaça have expanded, but the lively and fresh vibes largely aren’t budging—and what better time than July to soak in such radiance? Join us as we’re Catching Up with Cachaça for some much needed R&R (reveling and refreshment)! Subscribe now through June 30th (while supplies last!) to get this box—it’s slated to ship the week of July 5th.

Caribbean connoisseur Shannon Mustipher’s tasty tropical Wavy Colada begins with a new slick beach body for cachaça by way of a coconut oil fat wash, and from there, the hot-weather hits keep on coming: pineapple juice, a cordial inspired by tiki idol Donn Beach’s citrus and spices mixture known as Don’s Mix (a legendary, essential ingredient of many tiki drinks, including the original 1934 zombie recipe), and a splash of sharp and malty beer vinegar.

Served elegantly up by Christopher Longoria, the Ipanema Daydream satisfies cachaça’s call for verdant companions with a dynamic jalapeño-mint-lime cordial and pops of celery seed salt on top, and keeps the summer reverie rolling with cooling watermelon juice.

Think of this light and lustrous blend like your trendiest piece of day-to-night transition wear, brilliantly beaming along with the sun and perfectly suiting a sassy scene after it sets.

This old fashioned scores big thanks to a cocktail collaboration befitting of Brazil, the country with the most World Cup titles. The play-by-play is as follows: cachaça lover and Major League Soccer goalkeeper Stefan Frei brainstorms a bevy of potential tea elements to complement the spirit and passes it off to fellow Seattleite Adam Way, who then applies his cocktail know-how to turn it into a reality.

The resulting aromatic Give and Go fields a team of first flush Darjeeling syrup and Earl Grey and chai bitters to showcase the mellow and earthy side of cachaça for a truly trophy-worthy summer night sipper!

Coupon Code
Subscribing for the first time? Don’t forget to use code CATCHUP15 for $15 off!