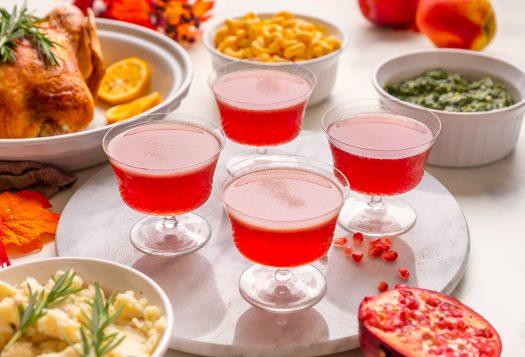 We have spoilers for the November 2021 Shaker & Spoon box!  The box theme is Fruits of Fall: American Apple Brandy!

As we looked ahead and considered the ideal starring spirit for November, a time to be thankful and hopeful heading into the holiday season, capturing the flavors and scents of autumn quickly became the aim. We thought back to how, when it came time for America to stake a claim on a spirit of its own—coincidentally during the decades surrounding its own founding—Northeastern pioneers and even presidents needed only to look up at the trees.

As with many historical gems dormant through the spinning wheel of cocktail trends, American apple brandy has benefited from a modern boom of history-minded spirits makers who place just as great a value on the old as on the new. For evidence, look no further than the bottled-in-bond apple brandies produced across the country today that’ve inspired this box—a distinction that boasts full transparency and provenance, with great respect paid to the apple crop and the place at which it’s distilled.

Let Fruits of Fall: American Apple Brandy transition you smoothly into the season with an appetizing appley base and equally of-the-moment ingredients for cocktails that’ll nestle right up alongside its best sense memories: crisp weather, fantastic foliage, and aromatic ovens. Subscribe now through October 31st (while supplies last!) to get the Fruits of Fall Box—it’s slated to ship the week of November 1st.

Haley Traub’s Pear Necessities pairs off the apple of the brandy with its pome fruit pal in the form of a shrub that sees the sensational combination of pear and vanilla taking a sharp upturn along with apple cider vinegar. Tying together this tight-knit team, ginger beer brings its bracing bubbles for a flavor of homey harmony and an aroma you’ll wish you could bottle and bask in.

With this freshly in-season cocktail, Leah Moss looked to the once-forgotten classic Jack Rose for inspiration. She’s packed in some neat and nuanced late-fall flavors into her Rougeoisie: a grenadine riff enriched by bright cranberries, a dash of aromatic bitters, and fervently fruity apple brandy, all lifted up by lime and a sprinkling of freshly grated nutmeg on top.

In honor of the trees starting to set forth their fireworks displays of rich reds, oranges, and yellows, here’s an old fashioned that harbors the arbor with one such tasty type. To boost a syrup modeled to capture the flavors of chai, Jason Kilgore chose birch, which twists the warm spices with a touch of minty wintergreen.

With such soft essences swirling around, it takes a spirit of great stature to carry the cocktail and, in Wolfe & Wehr, bottled-in-bond apple brandy takes center stage, pitching in its apple, wood, and spice flavors with a clearly defined voice for a stiff and warming autumn celebration.

Coupon Code
Subscribing for the first time? Don’t forget to use code APPLE15 for $15 off!