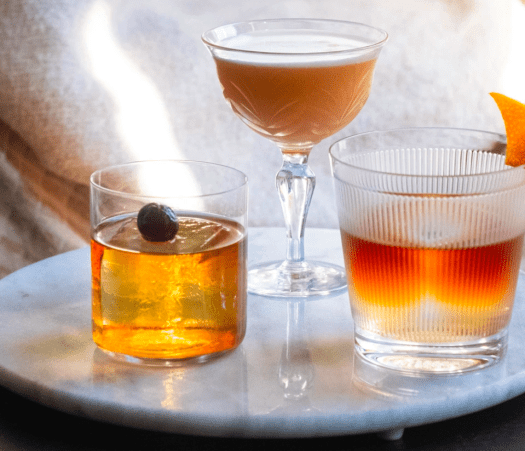 We have spoilers for the April 2022 Shaker & Spoon box!  The box theme is ALL EYES ON RYE!

The story of rye, both as a crop and style of whiskey, is one of resilience and heritage. As the long winter’s approaching and a farmer needs something to last the season and protect and enrich their soil through lingering low temperatures, rye’s a mighty fine go-to. When Prohibition knocked rye whiskey off the top shelf and a long reign of clear spirits and bourbon began, it still managed to get up from the mat for a resounding rally—that’s hardiness.

Rye whiskey was withering as recently as the turn of the millennium, so what changed? What was it that helped save one of the very first American-made spirits from the brink of extinction? In a word, cocktails. In the mid-2000s, when a new spark of creativity brought droves of discerning patrons into bars across the country, an effort began to bring rye back, not only to reclaim its role in the classics, like Manhattans and old fashioneds, but also to assert its full-flavored dry spiciness in new, avant-garde concoctions.

With All Eyes on Rye we can’t wait to see how a new generation of artful mixologists further fortifies the roots of this robust spirit. Our bartenders have charted three paths forward, each showcasing the spirit for a delicious getaway in a glass. The seasons are slow to turn these days, but settle in and fix your gaze and palate on this whiskey for a very helpful rye-minder: a fun and adventurous rebound is always right up ahead! 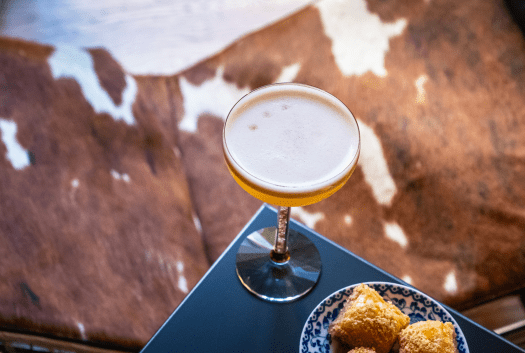 Once upon a time, Mony Bunni told us one very special thing, and we’ve been all ears ever since. And now with this sumptuous cocktail, Mony welcomes you to the world of Levant and Mediterranean regional desserts with a lip-smacking take on a legend—the Baklawa Sour. The syrup tastes of honey, walnut, and rose and orange blossom waters and, along with an egg white for a luscious texture, it shakes up the sharp edge of rye into something considerably softer and brighter. Countless families have their own guarded, time-tested version of the recipe for this holiday-favorite treat, but thankfully this drink won’t be a secret for long.

First-generation Arab American and Chicago-native Mony was the Season 6 national champion of Speed Rack. She is currently the beverage development specialist at Tenzing Wine and Spirits and is a cofounder of Support Staff, a nonprofit focused on improving the mental health of Chicago’s hospitality community. 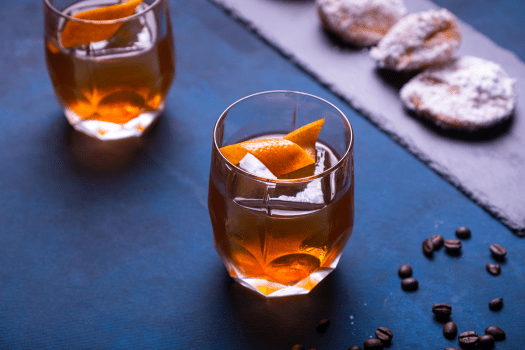 The street sign reads Bourbon, but Ryan Maybee is wandering through New Orleans with rye in mind. His Creole Sling takes the flavors of the area’s dark and nutty chicory-charged style of coffee and goes bold for bold with sturdy rye whiskey. But much like any good jazz number, just wait till the great nuanced notes come marching in from vanilla-cinnamon maple syrup, pecan, and uplifting, zesty orange. The bayou doesn’t have to be by you to sling back this rich, aromatic pick-me-up and keep you in the best of spirits!

Ryan is a certified sommelier, a certified specialist of wine from the Society of Wine Educators, and, in 2012, became the first person to complete the Bar Master Certification from Beverage Alcohol Resource in NYC. The following year he partnered with Andy Rieger to revive Jacob Rieger & Company. 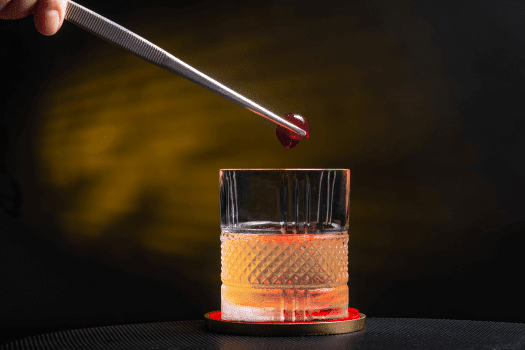 While the Homestead Old Fashioned is named for the rye-history-relevant borough on the outskirts of Pittsburgh, it’s also an apt indicator of the place it’s best enjoyed—your abode. What’s that? You’ve seen quite enough of your house over the past year? Granted, but it won’t be difficult after sipping this blend of baking spices, peppy peppercorns, and rye to imagine your once-familiar walls as those of the most cozy of cabin settings. Despite the ice, Spencer Warren’s classically minded cocktail is a beckoning beam of warmth for an experience that will be the cherry on top of your night in. After all, be it ever so humble, there’s no place like home.

A Steel City craft-cocktail pioneer, Spencer has opened many places in Pittsburgh over the years, including Embury, and brought back the much-anticipated Miracle Holiday Pop-Up Bar & PopUp Embury. His most recent openings were the neighboring Penn Cove Eatery and the Warren Bar & Burrow in 2018.

Coupon Code
Subscribing for the first time? Don’t forget to use code LETSGO for $15 off!