GLOSSYBOX kindly sent me the April 2015 box to review early and I am so excited to share it!  GLOSSYBOX is a monthly beauty subscription box and includes five luxury surprise beauty items shipped to your door.   I have been a subscriber for years (in addition to getting review boxes I also pay for a subscription) and am always in awe at the value they pack into their boxes.They ship via USPS and generally boxes ship in the second half of the month.  Sometimes it’s the last week of the month and sometimes it’s closer to the 20th of the month. 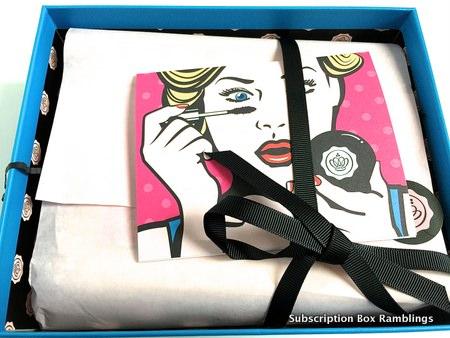 I saw full spoilers on this one yesterday so I pretty much knew what to expect, yet I was still really excited to get mine.  I do want to mention that not everyone will get the same variation of this box.  At least I don’t think so.  I know everyone will get the first two items below, but the rest (or just one or two) may be different.

~Estée Lauder Enlighten Dark Spot Correcting Night Serum ($14.88): I have received this in the past and I have been a fan.  I have stepped up my skincare game lately and will add this into the mix.  In less than 4 weeks a majority of people who have tried this could see the differences in their skin.  I can’t recall if I used it for the full 4 weeks last time, but I do know that my skin looked better.

~AERIN Waterlily Sun ($19.41): This is a totally new scent for me and it’s gorgeous.  If you don’t like it at first, give it about an hour and see what you think.  It gets even better.  It’s described as featuring “Sicilian bergamot and lush dewy greens, balanced with delicate waterlily, jasmine samba and warm musk”.  I found it a little spicy and could for sure pick up the grass scent.

~Obsessive Compulsive Cosmetics Stained Gloss (Androgyne) ($18): Oh my!  This is just like the Obsessive Compulsive Lip Tar we have received from GB in the past except this has shine to it.  Oh and the fact that mine is orange.  It’s like traffic cone orange.  I like that it’s glossy, but I don’t know where I will wear this.

~Marrakesh Endz Split End Mender & Preventer ($5.99): As you could probably guess by the name this is for split ends.  It helps repair split ends and also helps with frizz.  I am a big fan already!

~Julep Gel Eye Glider (Olive) ($16): I always find it so interesting when I see a product that has a subscription box of it’s own appear in a different subscription box.  Although I probably shouldn’t be too surprised since Julep nail polish was in GLOSSYBOX in February!  Anyway, eyeliner isn’t overly exciting to me even if it is fantastic (and I hear this is), so I will be passing it along to a friend.

~Thursday Friday Make-up Pouch: There was a rumor that Thursday Friday (you might remember them from last summer’s FabFitFun) was going to be in February’s GLOSSYBOX.  But it wasn’t and I was SO hoping that it was just delayed because I knew whatever they would do for GB would be fun.  And here it is!  I think the pouch is adorable and I love when they add extras to the box like this!  Inside the pouch (which is about 5″x6″) is a discount code for Thursday Friday.  The amounts, which are a mystery, expire on 5.31.15 and are unique to each user.  Mine was for 30% off.

All totaled I came up with a value of $74.28 for the April 2015 GLOSSYBOX and that doesn’t even include the cost of the pouch.  The contents of this box may not have totally wowed me, but when combined with the pouch I love it all!

What do you think of this month’s GLOSSYBOX so far?  If you are a new subscriber and are interested in ordering you can use the coupon code “LASHXTEND” to get a free ModleCo’s FIBRE LASHXTEND Mascara.  And just a reminder, GLOSSYBOX has been sending out variations in boxes the last few months so don’t be surprised if your box is a little different than this one.  It will have the Estee Lauder and the AERIN though!  And like with most of their “special” boxes supplies are limited so if you want to make sure you get the pouch and the printed box, subscribe now!